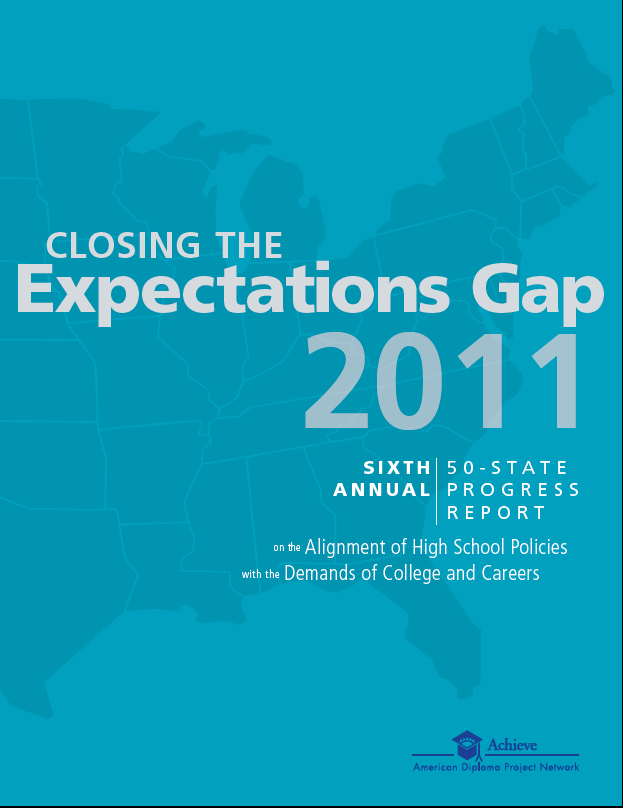 WASHINGTON – February 3, 2011 – Achieve's sixth annual "Closing the Expectations Gap" report, released today, shows that in the six years since the National Governors Association and Achieve co-sponsored the National Education Summit on high schools, the goal of aligning the expectations for high school graduates with the demands of college and the workplace is the new norm across the United States.

"The biggest change we have seen since the Summit has been the broad acceptance by the general public, in addition to policymakers and business and education leaders, that all students should graduate from high school college- and career- ready," said Mike Cohen, Achieve's president. "While support for the college- and career-ready agenda is widespread, state progress adopting the policies of this agenda has remained mixed."

Achieve conducts an annual policy survey that asks all 50 states and the District of Columbia whether they have adopted standards, graduation requirements, assessments and accountability systems aligned to the expectations of two- and four-year colleges and employers. The national survey of state education leaders has measured the same areas of reform each year since the 2005 Summit and this year’s survey reveals the following results:

States have made important gains on the college- and career-ready agenda since 2005 with the most progress in the area of standards and data systems. Despite the progress in these areas, there is still much work to be done. "States must now ensure that the higher expectations they have adopted in their standards are carried out in related policies such as graduation requirements, assessments and accountability systems that value college and career readiness," Cohen urged. Reaching the full promise of the college-and career-ready agenda will require a concerted effort by all supporters to not only ensure that the right policies are in place but that they are fully implemented and that leaders, educators and students have the support they need to meet higher expectations.

Cohen went on to say, "We are at a transformational moment for the college and career-ready agenda. With nearly all states setting high expectations for their students, over 40 states adopting the Common Core State Standards and as many states engaged in efforts to implement the standards – including creating aligned common assessments – achieving the promise of college and career readiness for all is within reach. Reaching this promise is critically important not just for students and their future but for their communities and for the continued prosperity of the United States."

To see a full copy of the report, go to www.achieve.org/ClosingtheExpectationsGap2011.

Created in 1996 by the nation's governors and corporate leaders, Achieve is an independent, bipartisan, nonprofit education reform organization based in Washington D.C. that helps states raise academic standards and graduation requirements, improve assessments, and strengthen accountability. Achieve is leading the effort to make college and career readiness a national priority so that the transition from high school graduation to postsecondary education and careers is seamless. In 2005 Achieve launched the American Diploma Project Network. Starting with 13 original states, the Network has now grown to include 35 states educating nearly 85 percent of all U.S. public school students. Through the ADP Network, governors, state education officials, postsecondary leaders and business executives work together to improve postsecondary preparation by aligning key policies with the demands of college and careers. Achieve partnered with NGA and CCSSO on the Common Core State Standards Initiative and a number of its staff served on writing and review teams. More recently, Achieve was selected to manage the PARCC assessment consortia. The 25-state PARCC consortia were awarded Race to the Top assessment funds to create next generation assessments in math and English aligned to the CCSS. For more information about the work of Achieve, visit www.achieve.org.