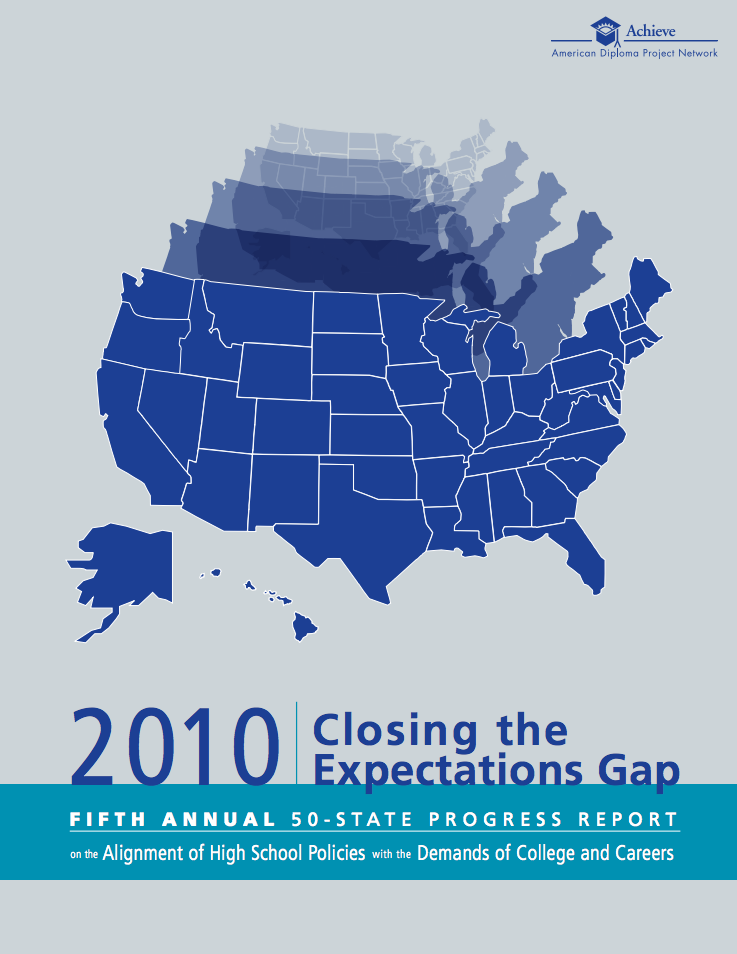 WASHINGTON – March 1, 2010 – Achieve's fifth annual "Closing the Expectations Gap" report, released today, shows that in the five years since the National Governors Association (NGA) and Achieve co-sponsored the National Education Summit on high schools, the goal of aligning high school graduation requirements with the demands of college and the workplace has gone from a radical concept to the new norm throughout the country. Such change, measured across all 50 states and the District of Columbia, can largely, if not exclusively, be attributed to state leadership.

"What started off as isolated efforts among a few states five years ago has produced a national consensus: all students should receive a quality education that prepares them to succeed in college, career and life," said Mike Cohen, Achieve's president. "We applaud state leaders for spearheading what will benefit the future of our children and our nation."

This year marks the fifth anniversary of the "Closing the Expectations Gap" report, which Achieve has conducted annually since 2005 when it launched the American Diploma Project (ADP) Network at the National Education Summit to challenge states to work together on a college- and career-readiness agenda. The 50-state survey measures the same five areas of reform each year, as listed below, and reveals the following changes over the last five years:

"I'm proud of the progress Tennessee and other American Diploma Project Network states have made in just five short years," said Achieve co-chair and Tennessee Governor Phil Bredesen. "The challenge now for all states, as we discovered in Tennessee, is to sustain progress and push forward on the implementation of college- and career-ready policies so they become the norm not just in policy, but in fact in every classroom."

The Common Core State Standards Initiative will help accelerate the college- and career-ready agenda. Building on what the states have already accomplished - and at their request - these next generation standards will help states further define college and career readiness for students, parents and educators. They will also provide a foundation that will enable states to voluntarily create and use high-quality common tools such as assessments, curriculum, instructional materials (i.e. textbooks, software) and professional development programs.

To see a full copy of the report, go to www.achieve.org/ClosingtheExpectationsGap2010.

To download this press release in PDF format, go here.

Created in 1996 by the nation's governors and corporate leaders, Achieve is an independent, bipartisan, nonprofit education reform organization based in Washington D.C. that helps states raise academic standards and graduation requirements, improve assessments, and strengthen accountability. Achieve is leading the effort to make college and career readiness a national priority so that the transition from high school graduation to postsecondary education and careers is seamless. To make college and career readiness a priority, in 2005 Achieve launched the American Diploma Project Network. Starting with 13 original states, the Network has now grown to include 35 states educating nearly 85 percent of all U.S. public school students. Through the ADP Network, governors, state education officials, postsecondary leaders and business executives work together to improve postsecondary preparation by aligning high school standards, assessments, graduation requirements and accountability systems with the demands of college and careers. For more information about the work of Achieve, visit www.achieve.org.