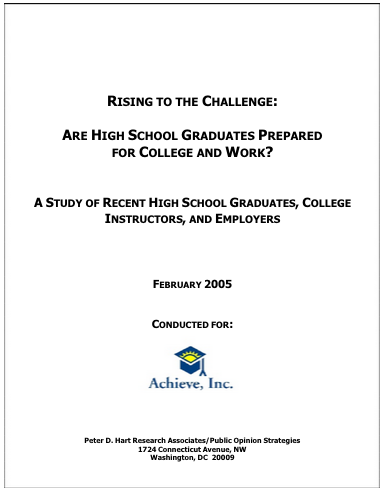 WASHINGTON – February 7, 2005 – As many as 40 percent of the nation's high school graduates say they are inadequately prepared to deal with the demands of employment and postsecondary education, putting their own individual success and the nation's economic growth in peril, according to a national survey of 2,200 Americans, including nearly 1,500 recent high school graduates, 400 employers and 300 college instructors.

According to the survey – released today by Achieve, Inc. – college instructors estimate that more than two out of five (42 percent) college students are not adequately prepared by the education they received in high school to meet the expectations of college. Nearly as many (39 percent) recent graduates enrolled in college say they have gaps in their preparation. Meanwhile, employers estimate that 39 percent of recent high school graduates are unprepared for the expectations that they face in entry-level jobs, which is identical to the proportion of recent graduates in the workforce who say that they have gaps in their preparation. Employers estimate that an even larger proportion (45 percent) of recent entrants into the workforce are not adequately prepared to advance beyond entry-level jobs.

"While American public high schools are doing a reasonably good job with a majority of their students, they are seriously failing a substantial minority of young people across the nation," says Mike Cohen, president of Achieve, Inc.

The research indicates that the preparation gaps cut across a range of core skill and knowledge areas – most notably work habits, ability to read and understand complicated materials, and math, science and writing skills. Large majorities of college instructors are dissatisfied with the job public schools are doing in preparing students for college when it comes to writing quality (62 percent) and their ability to read and comprehend complex materials (70 percent). Instructors estimate that half of public high school graduates are not adequately prepared to do college-level math or writing.

If Only I Had Worked Harder…

An overwhelming majority of students who have entered college and the workforce during the past three years say that, knowing what they know now, they would have worked harder and applied themselves more in high school. Over three-quarters of all graduates not in college (77 percent) and nearly two-thirds of those in college (65 percent) would have applied themselves more in high school. Moreover, more than 8 in 10 (81 percent) recent graduates say that they would have worked harder if their high school experience had demanded more of them.

"We're hearing a clear message from our graduates that we do them no favors if we set the bar for performance too low," says Gov. Bob Taft (R-OH) and a co-chair of Achieve, Inc. "Young people are telling us loudly and clearly that they want to be challenged. This message should come as a wake up call to governors and other state officials to do all that is in their power to ensure that their states' graduates are better prepared for success."

"Students shouldn't have to wait until they are out of high school to find out what's expected of them. Business leaders in every state have a responsibility to get involved with public schools to help ensure that students, and their parents and teachers, fully understand what it means to be prepared," says Art Ryan, chairman and CEO of Prudential Financial, and Achieve co-chair.

The data also show that the quality of preparation that students receive in high school is closely associated with high expectations and solid academic standards. According to the report, only one-quarter (26 percent) of recent graduates in college and one-fifth of those in the workforce say that they faced high academic expectations in high school and were significantly challenged.

Fewer than half (46 percent) of all graduates were asked to do a great deal of writing in high school. College students who were expected to write a great deal in high school, including longer assignments such as term papers or research reports, feel much more prepared for the quality of writing expected of them in college (79 percent feel well prepared) than do students who faced lower expectations for their quantity of writing (51 percent).

"Each and every one of the nation's 16 million high school students today must master complex skills and knowledge if they are to be able to get good jobs and compete in the global economy," says Intel CEO Craig Barrett, a board member of Achieve, Inc. "The students are telling us that they need to be challenged with higher expectations and tougher academic standards to help them build the foundation they need to be successful in college and work – and we need to listen."

The study, conducted by Peter D. Hart Research Associates and Public Opinion Strategies, explored the magnitude of the preparation gap as seen from the perspectives of the three different target audiences and found some interesting similarities and differences among the groups. Among the key findings:

Too Much Remediation: Seven in ten college instructors spend at least some or a significant amount of class time reviewing material and addressing skills that they think should have been taught in high school. College instructors estimate that half of the students at their schools are inadequately prepared to do college level math and the same proportion is inadequately prepared for college level writing.

Employers & Graduates Agree – A High School Diploma Is Not Enough: A significant majority of employers say that a high school diploma is not enough to prepare students to work in their companies. Only a quarter of employers say that recent high school graduates are well prepared for jobs in their companies, while three quarters say that graduates of two and four year colleges or training programs are well prepared. Eighty four percent of high school graduates not in college believe they will need to go to college or get more formal training in order to get the jobs they want in the future.

Findings are based on interviews with 1,487 public high school graduates from the classes of 2002, 2003, and 2004. The total sample comprised 861 students currently enrolled in two- and four-year colleges and 626 high school graduates not currently enrolled in college, including 267 who had been enrolled in college but have withdrawn. The total sample includes oversamples for a total of 303 African Americans, 287 Hispanics, and 353 current college students who have taken a remedial course. Hart Research and POS also interviewed 400 employers who make personnel decisions, including owners, CEOs, presidents, and human resources professionals and 300 instructors who teach first-year students at two- and four-year colleges.

Created by the nation's governors and business leaders, Achieve, Inc., is a bipartisan, non-profit organization that helps states raise academic standards, improve assessments and strengthen accountability to prepare all young people for postsecondary education, work and citizenship. Achieve has helped nearly half the states benchmark their standards and tests against the best examples in this country and abroad and work in partnership to improve teaching and learning. Achieve serves as a significant national voice for quality in standards-based reform and regularly convenes governors, CEOs and other influential leaders at National Education Summits and other gatherings to sustain support for higher standards and achievement for all of America's schoolchildren.

For the full research findings and information on Achieve, Inc. and its work, go here.