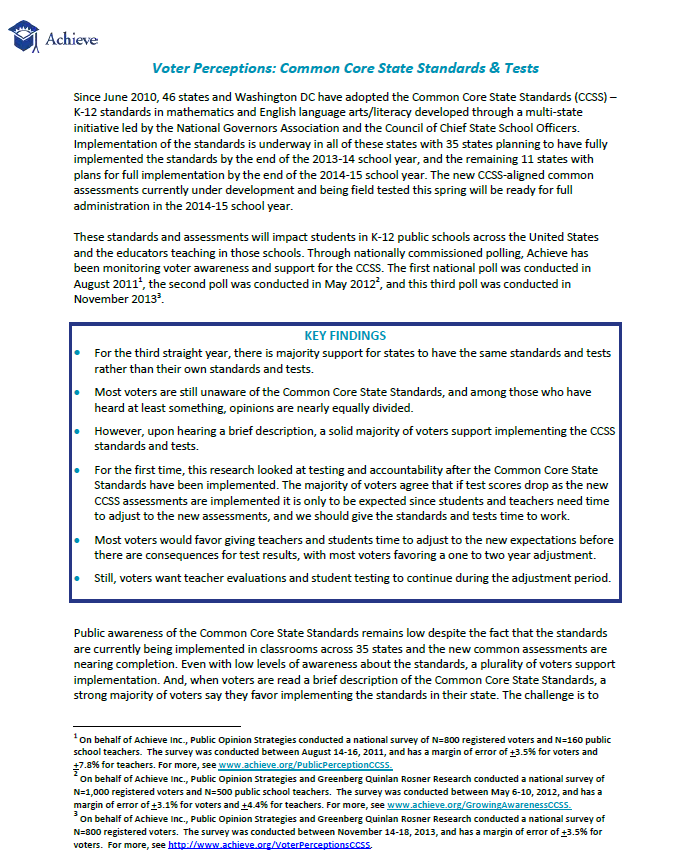 This year's poll shows that awareness of the Common Core State Standards (CCSS) is inching up, even though nearly two-thirds of those surveyed still have heard "nothing" or "not too much" about the CCSS. Of those that said they had read, seen or heard recently about the standards, opinions were almost equally split between favorable and unfavorable, yet a plurality still favor implementation. Once voters were read a brief description of the CCSS, a solid majority, 69%, favored implementing the standards.

Voters were also read claims made by both CCSS supporters and opponents and asked to choose which was closest to their point of view. Supporters' arguments of better prepared students, emphasis on critical thinking and less teaching to the test were favored by a two-to-one margin.

"Voters believe that schools should raise their expectations so that students graduate from high school ready for the world they will enter. With just basic, factual information about the Common Core State Standards and their purpose, voters favor the Common Core over the critics' objections," said Sandy Boyd, Achieve's Chief Operating Officer and Senior Vice President of Strategic Initiatives. "Supporters of the CCSS have a solid base of support, but this survey is also a reminder of the importance of talking to voters regularly. Voters are open-minded, believe that the quality of education is important and need solid information about the Common Core that gets past the noise and the scare tactics."

For the first time in Achieve's series of polls, voters were asked about the effect of the Common Core and new tests on accountability and teacher evaluations. Voters believe that both student testing and teacher evaluations are important and should continue during implementation. Consequences, voters said, should only come for teachers, students and schools after an adjustment period, with a majority favoring a one or two year adjustment period.

"With implementation occurring in nearly all states that have adopted the Common Core State Standards, voters believe there should be a reasonable transition time given during this undertaking," said Boyd.

Major findings from the nation-wide survey include:

Voter Perceptions: Common Core State Standards & Tests shows that there is voter support for implementation of the CCSS, including common assessments, even as implementation is occurring.

On behalf of Achieve, Public Opinion Strategies and Greenberg Quinlan Rosner Research completed a national survey of 800 registered voters November 14-18, 2013. The poll has a margin of error of +3.5%.