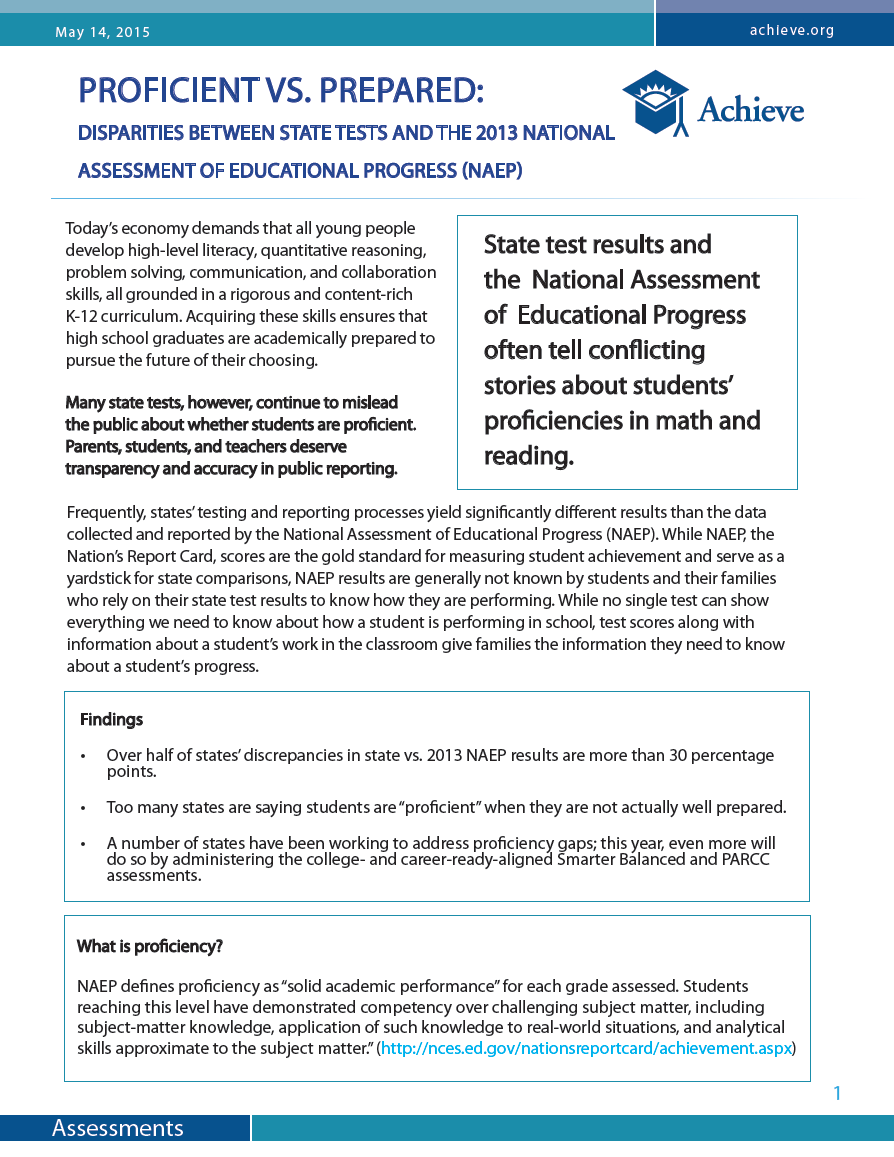 Achieve released a new report that highlights the fact that too often, state-reported proficiency rates in English Language Arts (ELA)/literacy and mathematics are disconnected from other benchmarks of readiness and vary widely from state to state. The report, “Proficient vs. Prepared: Disparities Between State Tests and the 2013 National Assessment of Educational Progress (NAEP),” details the discrepancies – or “honesty gap” – between student proficiencies as reported by states to students, parents, and educators, and as reported by NAEP, considered the gold standard of student assessment for comparisons across state lines.

Over the past two years, many states report proficiency rates more than 30 percentage points higher than their 2013 NAEP proficiency rates, leading parents and educators to believe that far more students are succeeding in grade-level ELA/literacy and mathematics than is actually the case.

“Parents and educators deserve honest, accurate information about how well their students are performing, and the extent to which they have a solid foundation for their continued learning,” said Michael Cohen, President of Achieve. “Tests are not the only source of this information, but they are certainly an important one. We don’t do our students any favors if we don’t level with them when test results come back.”

NAEP, also known as the “nation’s report card,” is the only assessment with comparable results for all 50 states. NAEP is administered to a representative sample of students from all 50 states every two years. The main NAEP assessment for reading and mathematics, which provides results for individual states, can be compared with previous assessment years going back to 1990. State participation was optional until 2003, the year all states were required to participate.

The Achieve report includes state-reported proficiency data from the 2012-13 and 2013-14 school years compared with 2013 NAEP results. Some states have made progress in closing the honesty gap by switching to new assessments aligned to their college- and career-ready state academic standards in the 2013-14 school year.

Many more states are administering new tests aligned to college- and career-ready standards this school year (2014-15). In addition, 2015 NAEP results will be released this fall.

“Leaders in many states have already recognized the need to administer more rigorous tests that will provide more honest and accurate information. Unfortunately, in some states there is already political pressure to abandon their new assessments and go back to using less rigorous tests,” continued Cohen.  “This report shows us that we can’t go back to the way we’ve always done it.”

Historically, this publicly available data has been similarly compiled and compared by the National Center for Education Statistics (https://nces.ed.gov/nationsreportcard/studies/statemapping/), The Education Trust (http://edtrust.org/), and has been included in the U.S. Chamber of Commerce’s Leaders and Laggards report (http://www.leadersandlaggards.org/).

Fourth grade reading has been highlighted as a gateway grade because learning to read by this grade sets the foundation for reading to learn throughout the rest of a student’s academic career. Likewise, eighth grade math has been highlighted because students need to have this foundation to be able to continue on through higher level math in high school. The full report is available here.