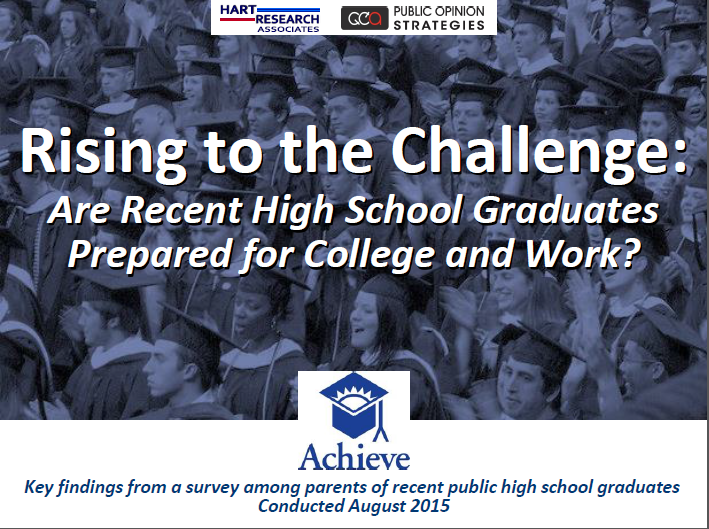 Washington, D.C. — October 8, 2015 — The third and final phase of a new national survey released by Achieve — Rising to the Challenge: Are Recent High School Graduates Prepared for College and Work — shows that better communication between high schools and parents is needed to address the disconnect between parents and students, faculty, and employers in perceptions of recent graduates’ readiness for life after high school. This survey builds upon Achieve’s 2014 survey of recent high school graduates and 2015 survey of employers and college faculty about recent graduates’ preparedness for success in college and careers.

84% of parents are at least somewhat satisfied with the job their child’s high school did of preparing them for success after high school, but only 56% of employers and 35% of college instructors are satisfied with the preparation of the graduates they teach and hire. Similarly, 73% of parents of college students believe that high school prepared their children extremely or very well for academic work in college — but only 53% of students themselves agree.

“Parents are more likely than faculty, employers, or even students to believe that their children are ready for their next steps upon graduation from high school,” said Sandy Boyd, Chief Operating Officer of Achieve. “Part of the disconnect between parents and others is that parents lack the information they need to guide their students. Parents report wanting more communication from schools to better understand what their children need to be ready and how they can help.”

More than half of parents report that their child’s high school communicated with them too little. The dissatisfaction with school communication is even higher in schools in which parents say their children were not challenged academically; 82% of parents whose children attended schools in which they experienced low academic expectations say that the school could have done better or did not provide clear information on the requirements and coursework needed for college.

Parents of children who attended high schools with low academic expectations were most likely to report that the school fell short in other areas as well.

Parents of children not enrolled in college are less optimistic about their preparation.

Parents and students agree that they would have done things differently.

Findings are based on a national online survey conducted online and by telephone from August 17–31, 2015, among 917 parents of recent public high school graduates from the classes of 2011–2014, including:

“Parents have an enormous impact on the academic success of their children, but they need to be equipped with better information about what it takes to succeed after high school,” said Boyd.