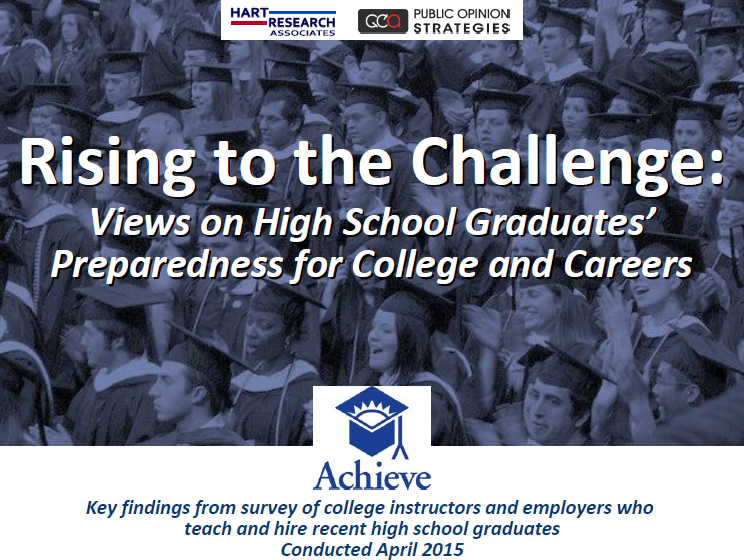 Washington, D.C. — July 22, 2015 — The second phase of a new national survey released by Achieve — Rising to the Challenge: Views on High School Graduates’ Preparedness for College and Careers — shows that 78% of college faculty and 62% of employers believe that public high schools are not doing enough to prepare students for the expectations they will face in college and the working world. This survey builds upon Achieve’s 2014 survey of recent high school graduates about their preparedness for life after high school, which was released in December.

“Employers and college instructors are affirming what recent graduates themselves have told us; the expectations of high schools do not line up with the expectations of postsecondary education and the working world,” said Michael Cohen, President of Achieve. “Nearly half of recent high school grads reported that they weren’t fully prepared for their next steps, and even higher percentages faculty and employers agree with them. We are hearing time and again that too many students with high school diplomas, who are told that they have met the requirements to move onto their next steps, are simply not adequately prepared to succeed in college or in a job.”

The survey, which updates a similar survey conducted by Achieve in 2004, found that more instructors and employers are dissatisfied with high school graduates’ preparedness than were a decade ago.

“These results show us that low expectations in high school have real consequences — not only for graduates themselves, but for our economy,” said Geoff Garin, president of Hart Research Associates, which conducted the survey. “College faculty are telling us that it’s more and more common for students to perform poorly or fail courses due to inadequate preparation. Employers increasingly need to require recent graduates to get additional education and training in order to make up for gaps. These are serious consequences that can only be addressed with better preparation and higher expectations in high school.”

Significant majorities of both college instructors and employers report that recent high school graduates arrive at college or the workplace with at least some gaps in their preparation:

Employers are reporting a significant increase in the need to require that recent high school graduates get additional education and training to make up for gaps.

Despite the shortcomings in preparation, there is broad agreement between college instructors, employers, and recent high school graduates about which proposals have the potential to improve preparedness for life after high school.

“We know that our schools can do a better job of preparing students for success in their next steps,” said Cohen. “We hear students saying that they are certain they would have worked harder in high school if they’d been held to higher expectations. It’s critical that schools clearly communicate the expectations of colleges and employers early in a student’s high school experience and help them to understand the coursework they will need to complete. When we set rigorous expectations, students can and will rise to the challenge.”

Findings are based on a national online survey conducted between April 23 and May 1, 2015 of college instructors and between May 11 and 15, 2015 of employers involved in hiring and personnel decisions, including: