Five times in the history of the United States, the nation’s governors have gathered with business and education leaders to discuss actions necessary to improve public education. 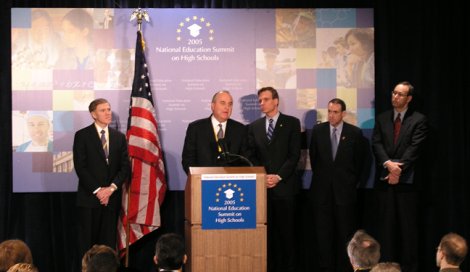 Together, the National Education Summits have been instrumental in creating and sustaining public support for the drive to raise standards and improve performance in schools.

At the 1996 Summit, the nation’s governors and business leaders pledged to work together, state by state, to raise standards and achievement in public schools. The Summit also led to the creation of Achieve to help states raise academic standards, improve assessments, and strengthen accountability.

The 1999 Summit examined the capacity of schools and school systems to deliver on the promise of high standards for all children, and it produced an unprecedented set of commitments across the states to improve the quality of teaching, provide supports to struggling students, and tighten accountability systems so that no children are left behind.

The National Education Summit on High Schools was hosted by Achieve and the National Governors’ Association, with 45 governors, CEOs from some of the nation's largest businesses, and leading K–12 and postsecondary education leaders participating. On the Summit's final day, Achieve announced the launch of the American Diploma Project (ADP) Network – a coalition that now includes 35 pioneering states.