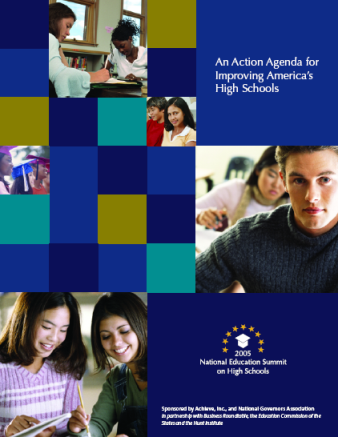 The two-day Summit, which is co-sponsored by National Governors Association (NGA) and Achieve, Inc., marks the fifth time since 1989 that leaders have gathered to address the urgent needs of the America's educational system. Despite the tremendous progress states have made over the years, there has never been a summit focused entirely on high schools—until now.

This Summit is an integral part of NGA's Redesigning the American High School initiative and a response to the February 2004 report from the American Diploma Project which maintained that for too many graduates, the American high school diploma represents a "broken promise."

"This Summit is a major step forward in what I hope will be sustained momentum towards comprehensive reform in dozens of states throughout the country," said NGA Chairman Virginia Gov. Mark Warner. "When this Summit ends, our work in states and territories will just be beginning. It's time to turn rhetoric into reality."

"We face the global economy today with workers who are largely not prepared to compete for the well-paid, cutting-edge jobs that are fueling economic growth around the world," said Kerry Killinger, CEO of Washington Mutual and vice-chair of Achieve Inc. "The Summit is an extraordinary opportunity for states to work together to raise our academic expectations and the rigor of the preparation we give to our young people." The Summit will focus on an array of reform-related issues including: restoring the relevance of a high school diploma; increasing the graduation rate; closing the achievement gap; and aligning high school, college and workforce expectations. To frame these complex issues, NGA and Achieve, Inc. released the Action Agenda for Improving America's High Schools earlier this week. It calls on the nation to raise expectations for what students should be required to achieve in high school, identify clear ways states can transform high schools and create new options for students so that more will graduate. It also calls upon states to improve the quality of teaching and leadership in high schools.

Saturday's opening plenary session will be highlighted by a keynote address by Bill Gates, co-founder of the Bill & Melinda Gates Foundation. After Gates' keynote, David Gergen will moderate a panel discussion on an array of issues from increasing the graduation rate to closing the achievement gap.

During the Summit's closing plenary on Sunday, Feb. 27, U.S. Department of Education Secretary Margaret Spellings will address the governors about the federal-state partnership in education, before joining a distinguished panel, including: Sen. Jeff Bingaman; Rep. Michael N. Castle; and Rep. Rubén Hinojosa to discuss the federal role in high school reform.

"We're raising the bar for graduation, but we're not going far enough so we need to take more steps to close this preparation gap," says Ohio Gov. Bob Taft, co-chair of Achieve and a member of the NGA Committee on Redesigning the High School. "We need to ensure that the standards and the tests and the course taking requirements for earning a high school diploma really reflect the real world demands of college and our economy. This is critical for job creation and economic growth to have graduates who are prepared so we need to raise the high school exit standards."

Previous Summits—held in 1989, 1996, 1999 and 2001—were instrumental in creating political momentum and public support for raising academic standards and performance in the nation's schools. This year, participants will address such core issues as strengthening requirements for rigorous coursework, bringing colleges and universities together with K-12 education to set common expectations, improving teaching and principal leadership and expanding options and support for students to achieve high standards.

"It has been said that the need for reform is driven by the fact that high schools haven't changed in 100 years. I think we can safely predict here today that policymakers and educators will look back at this Summit and credit it for being the catalyst for the improvements we will begin to see in high schools across America," said NGA Vice Chairman Arkansas Gov. Mike Huckabee. "High school redesign isn't going to be easy, but we as governors, business leaders and educators must accept this challenge. The future of our economy depends on our success."

The 2005 National Education Summit on High Schools is sponsored by NGA and Achieve, Inc. in partnership with the Business Roundtable, the James B. Hunt Institute and the Education Commission of the States.